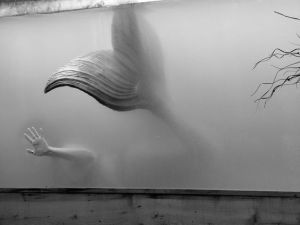 Sitting, talking with the ladies over a lunch of green and potato salad, plus cold chicken, Pam, for the first time in longer than she could recall, found herself having fun. She was able to talk about absolutely nothing with an eclectic collection of well-educated women, who all, by appearance at least were in the same boat as herself.

After lunch, Pam returned to her room, stepped into the bathroom, and stripped naked again. Her clarity of focus, thanks to the lack of steam on the mirror, was much better than before. Lifting one arm at a time, she studied, then palpated each of her breasts, checking for any previously unnoticed lumps, or oddities. Next, she moved onto her abdomen, pressing and pushing in and around her navel, moving in an outwardly circular motion as high as her sternum, and as low as her pubic line. The only mentionable discolourations, were her tiger stripe stretch marks, marks of pride specific to two pregnancies. Again, no lumps or bumps were found. Next she examined her legs, starting at her toes, then working her way up to her buttocks. Nothing out-of-order there, beyond the childhood scars of life. Hands, wrists, arms, and neck were scrutinised; all found to be in relatively good working order.

It was her face that gave her difficulty. Not because there was anything wrong with it, nor any physical deformation on any part of it. The puzzler was that the face and eyes staring back at her from the ensuite mirror, whilst familiar, was not her own. It was a face older than her forty-five years of age. Her hair was more grey than red, and was barely in possession of any discernible style at all. Pam felt relief when, on gazing deeply and intently into her eyes, that they were the correct colour, just with more crows feet at the edges than she could recall seeing before.

Walking from the bathroom, Pam looked over her shoulder at her buttocks, and the way she moved. Had they somehow ‘dropped’ over night? There appeared to be no ‘sensuality’ to her gait either, something was definitely amiss.

Redressing, Pam tied her hair into a tight pigtail, yet was unable to find her make up. Plus, she was wearing some other woman’s clothes. These garments lacked life, there was no elegance to them, and worst of all, they looked of a style suited to a woman at least twenty years older than she. Rifling through the pile of clothes neatly stacked in the bedside wardrobe, whoever had left their clothes behind obviously lacked a sense of current trend. The shoe’s were practical and comfortable, yet an offense to the eye, and a mismatch to the entirety of the available clothing. Pam felt like she was in a second-hand shop, rifling through the bargain bin hoping for diamonds, but finding nothing more than well worn gravel stones.

The Hollywood Clinic, a separate part of the Hollywood Hospital, a private Hospital in Nedlands, Western Australia. Without a second, let alone third thought, Pam withdrew a purse from the aged and uninspiring handbag on the night stand.

Walking out of her room with purpose, she strolled sensuously past the nursing station, ignored the ‘whereabouts book’ she was obliged to fill out as part of her being an inpatient whenever she left the ward, turned right through a glass sliding door, and left the building.

Had Pam looked at her watch, she would have noted that it took her two minutes and twenty-seven seconds to reach ‘Entrance 5’, and Monash Avenue. Not sure which direction to go, Pam flagged down a passing taxi, and asked to be taken into Subiaco.

The cab driver, a smiling inoffensive looking chap of no apparent age, who by the time they had made it to Subi, she suspected was an escapee of a middle eastern war zone, told her what she owed as a fare. Looking into the purse she had taken from the worn hand bag, she found a plethora of plastic cards, and not a single cent. Her driver, noting the expression on her face, told her that his EFTPOS card reader could be ‘tapped’ if needs be. Not knowing exactly what ‘tapping’ was, Pam feigning ignorance, handed him a random card with ‘Visa’ stamped in one corner. After a few seconds, and then a ‘beep’, the driver handed her back her card and receipt. Stepping out, she strode directly into ‘Circles’, and approached the counter in  the manner of a lioness toward a startled gazelle of a lass who was visibly starting to cringe behind the sanctuary of her counter. Having nowhere else to hide, and aid beyond vocal range, the wide-eyed girl said “Hello, and welcome to ‘Circles’.

“I must have my hair cut and coloured this morning. If this establishment is incapable of fitting me in, could you point me in the direction of your most successful competitor.” Pam informed her bluntly.

After one, then a second blink, the girl behind the counter replied as curtly as she had just been spoken too. “We don’t take walk in’s off the street, and we are fully booked for the next four months. I’m terribly sorry madame, but you will have to take your business elsewhere.”

What the desk girl hadn’t done was check the ‘book’ that sat open in front of her, showing the times and names of people who had taken the time to book.

Glancing at her watch, and then the girl behind the counter, Pam said “You would be referring to the two-hour space, starting in four and a half minutes, that has just been poorly rubbed out by yourself I would imagine, judging by the lack of effort made, with Stephanie?” Butter would not have thought of climbing into Pam’s mouth, let alone melting there.

Four rotations of the small hand on her recently purchased Dior timepiece later, Pam hailed another cab. Garments à la mode filling a variety of bags, all sporting labels of a haute boutique nature were placed onto the backseat, destination address given, and Pam settled back into the seat of the taxi. Taking in her surrounds as the taxi, the driver was probably a Communist, something was greatly amiss with those places familiar to her. Buildings, whilst the same, were different in physical appearance. Colour scheme’s, gardens, even pedestrians were unsettlingly different to her eye, and yet she was unable to put her finger exactly on what it was. The attire of people passing her, was subtly mismatched to the current trends of the moment. Street front business signage sported names she had not previously seen on shop fronts she knew well. Even traffic lights and road signs had changed, not dramatically, but enough to warrant a second look. The hairstyles of men and women were not familiar to her. Most of all, was the traffic. Cars, buses, and trucks looked oddly futuristic. A Police car, driven by a Policewoman(?) no less had an odd colour scheme, the lights on the roof were nothing like she had seen before, even the car itself was of a size and shape that was ‘off’. Familiar, yet not.

Rifling through the deplorable handbag, Pam, surprisingly, was unable to locate her keys. Worse still, after disappearing around the side of the house, the pot plant holding the spare key was nowhere in sight. Again, the shroud of perplexity fell over her. The house itself was certainly her house, but looked different, and now there was some dog she barking at her from inside. It almost sounded ‘happy’ to hear her? Who the hell let a dog into the house anyway? Vile outdoor creatures they are.

“Muffet!” came the yelled voice from somewhere inside. “Bloody well settle down! I’ll see who’s there is a second!”

The face looking back out at her was the picture of confusion. A man who couldn’t be any younger than seventy years old stared at her in the manner of a goldfish looking out from within  its glass home. His mouth opening and closing mimicking the fish.

“Bugger me, Maude, what the hell are you doing here?” Keith said in an astounded tone of voice quietly, switching quickly into the sounds of an extremely concerned husband finding his wife, currently the resident of the Hollywood Clinic, and undergoing treatment for mental health related issues at the door. “What have you done to your hair? Actually, what are you wearing, and where did those clothes come from?”

“Maude?” Said Pam, confused. “Who the hell is Maude, and what the hell are you doing in my house?”

“Don’t you bloody ‘dear’ me, and my name is certainly not ‘Maude’, whoever the hell that is, and what are you doing in my house? Get out of there immediately!”

“Jesus Christ”, swore Keith, seizing his mobile phone from the little telephone table in the hall entry. “Alright de….., sorry, alright, come in. My name is Keith, and I think that something fairly amiss has happened.” With that, he stepped out of the house, calling the dog behind him. He walked to the little front gate, opened it, followed the little Jack Russell through, closed it behind him, turned, walked ten paces east, and rang Dr. Miui’s rooms. When the receptionist failed to answer, he hung up and rang the Clinic. Thankful for the near instant response, he hurriedly explained the situation. The nurse he had spoken to told him to stay where he was, to keep his phone in hand, and prior to hanging up, ensured him she would locate Dr. Miui and the ball would most certainly be rolling.

Keith made a leash out of his belt for the dog.
TBC

Click the picture above, Bonchidai by Vardos ‘should’ appear, and thank you everyone for your interest in my wee tale.